Why Does My Dog’s Cuteness Make Me Want to HURT him? 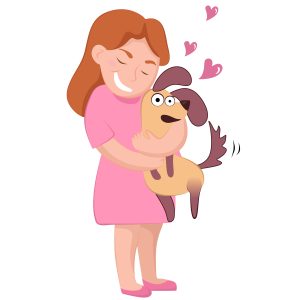 Let me say two things before we get real: first, I don’t really want to hurt my dog; second, I’m not alone in this feeling that I want to squeeze my dog until he pops.  Ok, disclaimer is issued, and we can move on.

Something Is Wrong With Me

As is normally the case, I always thought there was something psychologically wrong with me when I felt the urge to crush or bite my dog when he did something cute (for example, existing).  It never got to the point where I needed to seek help, because I always managed to control my urges to squeeze him past a safe point, or to nibble on his velvety elephant ear…but those concerning urges were still there.  Well, it turns out that this intense feeling of aggression is completely normal, and it is so common that it has a name: Cute Aggression.  Thanks, Science!

Yale University Psychologists started studying Cute Aggression in 2013[1], and measured participants’ urge to squeeze bubble wrap when they saw pictures of cute animals. As you can guess, the cuter the animal, the more squeezing.  Just two months ago, Frontiers in Behavioral Neuroscience, published a research article[2] that explains the most likely reason this cute aggression happens.

Researchers said that the reason we have these semi-violent urges to squeeze or bite our cute animals is because our brain is trying to balance out the flood of positive emotions we are experiencing.  Our brain is saying, “whoa, dude, you’re seeing something a little too cute here…we gotta figure out a way to bring this down a little bit. Let’s see here—oh, I know, KILL IT!”

But why would the brain do this?  Doesn’t it want us to be happy and live our best life?  And does it really have to go to such morbid extremes to rain on our parade? Well, our brain is doing us the same favor that got humans so far on this planet, and it comes down to responsible caretaking (whether it’s a human baby or an animal baby).

Being a Good Caretaker

From an evolutionary perspective, it wasn’t a good adaptation for humans to be so entranced by a cute thing that you couldn’t even take care of it. Sure, cute things got our attention over the millennia, but that wasn’t enough, so our brain threw this aggressive curve ball to balance the levels. In doing so, the person “is no longer incapacitated with overwhelming positive affect…that person may be better able to care for the baby.”[3] As you could guess, we are more likely to have Cute Aggression for our own dog compared to other people’s dogs.  This has to do with the emotional part of the brain attaching care to our pup that we’re familiar with, instead of one that someone else is responsible for taking care of.

Nothing Is Wrong With Me

It’s not a typical dinner table conversation, but its completely normal to be overwhelmed by your dog’s cuteness to the point of wanting to squeeze, bite, or hurt it.  The difference is that you don’t actually do it (that would make you a psychopath, and a terrible human being). Our brains are hardwired to balance the unreal cuteness we see in our pups everyday with equally unreal doom that is designed to bring us down to earth and be the good caretaker they need.